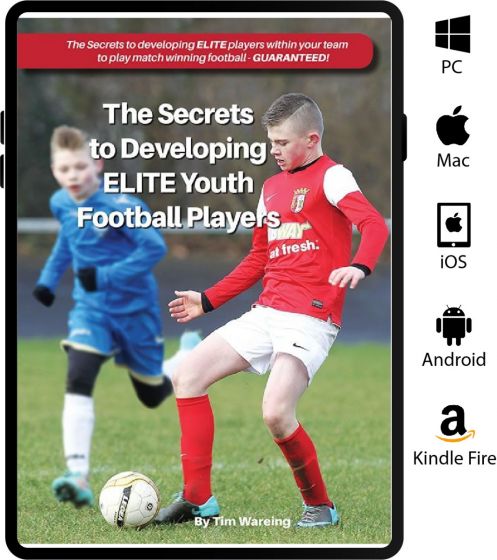 Skip to the beginning of the images gallery
Product Description
'The Secrets to Developing ELITE Youth Football Players' will aid in developing your group of players, whilst having them enjoy their training!

Tim spent six years at Irish Premier League side, Lisburn Distillery. He held roles as Reserve Team Manager and under 18 Manager. He played his part in developing Youth International Players and players for the first team, before setting up a very successful Academy for the Club.

As opinions changed in the direction the Academy was going, Tim stood down from his role and decided to take a sabbatical. He used the time to recharge his batteries and re-educate himself, visiting some of the top European Clubs, including FC Barcelona, SC Braga, Ajax and PSV Eindhoven, where he studied and exchanged ideas in youth development.

It was in Holland that he met with a top Portuguese Coach, Hugo Vicente, and the pair got talking about youth development. They shared similar philosophies and it was on this trip that two years later would see a new project launch in Northern Ireland.

The frustrations that Wareing had at his previous club are common across Northern Ireland. A lack of contact time with players, unqualified coaches, out dated methods and little to none specialist coaches and staff offer a limited opportunity for players to develop.

Re-energised he began to set up a very special project that would change the way youth football was delivered in Northern Ireland. Young players would come in and achieve up to 10 hours of contact time per week. Not only would they have access to Wareing but also a special talented team of experts. This would include games related training, match analysis, a conditioning coach, goalkeeper coach, education officer and pastoral care.

Players would come from all different backgrounds. Many arrived as broken players who had been told they weren't good enough, while others simply weren't receiving the correct education on and off the field to develop. Wareing would start to create better players, better people, using a new approach that was player and child centred. From conception to champions in 22 months attracted much interest from the National press and Irish Football Association. TW Braga would share their journey on their You Tube channel, @twsportsgroup, to date it has over 640,000 video views! These are the sessions that Tim Wareing used to help develop the complete player, that would improve each individual technically, tactically, physically and psychologically. This book has been specifically designed, so that each session is simple to follow, yet includes the coaching points that Tim offers to his players. These are all of Tim's preferred sessions that he has gathered on his coaching journey through his own experience and while visiting professional clubs across Europe.

Reviews 4
RATE THIS ITEM
Rating:
80% of 100
(4)
Write a review
Write Your Own Review
Only registered users can write reviews. Please Sign in or create an account