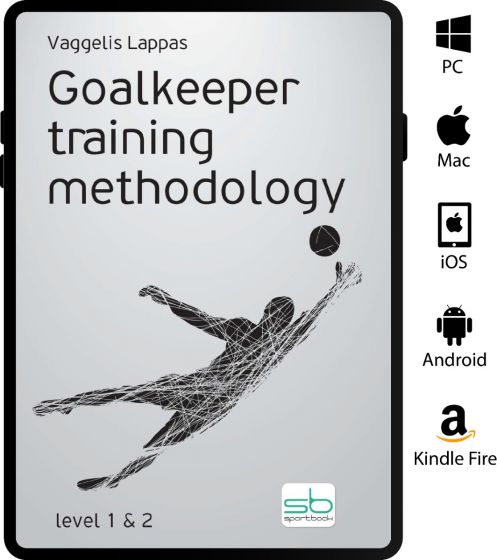 This book does not intend to discover something new or make any innovations. Its purpose is to organize our existing knowledge. It was written to address the needs that occur from daily training with young goalkeepers, which sets the base for analysis, planning and adapting methodology to the needs of every individual goalkeeper.

This book presents the 14 categories of GK training, both in order of importance and by age. Each training category includes a rich and specialized range of exercises that is accompanied by photographs and illustrations. In total there are 168 exercises to cover every aspect of the specialized GK training.

Vaggelis Lappas was born in Athens on the 28th of March 1975. He has UEFA A and AFC-GK Level 1 qualifications.

He competed in many amateur teams as well as for F.C. Keratsini in the 3rd Division. His career as a trainer began early on in 1998 as he took his first steps at the Academy of Amfiali (1998).

He did this while still having an overview of the Academy always in relation to the GK training. During the season of 2016-17, he signed with Al Dhafra FC, based in Abu Dhabi, which competes in the Arabian Gulf League. In 2018, he joined the Academy of Olympiacos FC as a goalkeeper coach and an Academy Goalkeeper Development Supervisor.

I want to congratulate Vaggelis Lappas on his book Goalkeeper Training Methodology. This book will help many goalkeeping coaches to improve their training and the level of their goalkeepers. With the help of many technical drills supported by coaching comments, coaches can bring their goalies to the next level!
Maarten Arts (Owner MAGC at MAARTEN ARTS GOALKEEPING CONSULTANCY)

I have nothing but admiration and respect towards Vaggelis Lappas. I have always admired his work and I am very happy that he was able to complete his project in spite of all the other demands on his time.
Giannis Samaras (Director of Football)

Vaggelis Lappas is one of the most professional goalkeeper's coaches that I have work with. He has the tools to make the best of any context that he faces, his creativeness, resourcefulness, and initiative allows him to face any demand. This book is a reflex of his author. Goalkeeper Training Methodology offers a very good insight into an excellent and solid perspective to the goalkeeping coaching based on years of experience, with a consistent theoretical approach but with a day-to-day application. It's a must-read for every professional in the are a.
Pedro Caravela (Assistant Coach U20 & Head of the Scout Department)

One of the best books that I have ever read about goalkeeping. Vaggelis Lappas is a top goalkeeper coach who has been working at a high level but the most important for me is that he has experience in all age groups. This gives him the opportunity to go deep in the process of goalkeeping education explaining all the steps in a very simple and clear way. This book is an amazing tool for all the goalkeeper coaches!
Dimitris Mousiaris (Goalkeeper Coach at WADI DEGLA)

An excellent book that categorizes the basic GK principles in a logical progression. Simplicity is the most difficult. In this book, you will be able to see simple, but crucial things, that will give you the fundamentals for the next step.
Dimitris Gkoumas (Football Analyst at ASPIRE Academy / Qatar Football Association)

Reviews
RATE THIS ITEM
Rating:
0% of 100
(0)
Write a review
Write Your Own Review
Related Products
Check items to add to the cart or