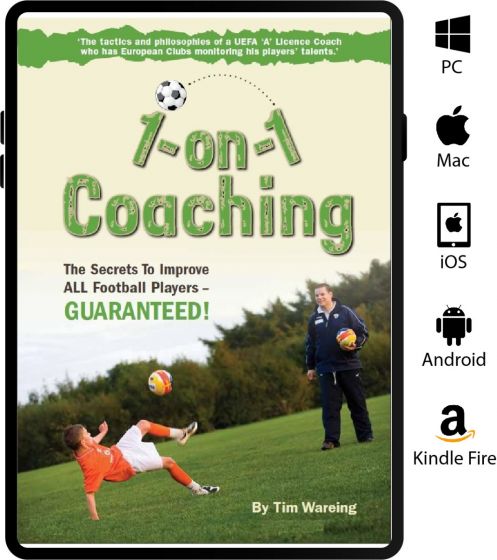 Skip to the beginning of the images gallery
Product Description
'1-on-1 Coaching. The Secrets To Improve ALL Footballers - GUARANTEED!'

This book has been specially designed, so that each session is simple to follow, yet includes the coaching points that Tim offers to his players. Today, when we see less and less street football, the technical ability of our players is decreasing. This eBook will change that and improve everyone's technical ability and game understanding.


Who is Tim Wareing and how can he develop my players?

Tim spent 6 years at Irish Premier League side, Lisburn Distillery. He held roles as Reserve Team Manager and under 18 Manager. He played his part in developing Youth International Players and players for the first team, before setting up a very successful Academy for the Club.

He continues to travel on a regular basis across Europe to continue learning and sharing his coaching philosophy. Tim has visited FC Barcelona, Ajax, PSV Eindhoven and Braga. His training methods will improve ALL players through using the latest and most innovative procedures.

With a host of clients and clubs requesting Tim to work with them, and families travelling from New York and Paris to access his coaching, he has put his award -winning programme together in this book. '1-on-1 Coaching The Secrets To Improve ALL Footballers - GUARANTEED!' not only provides readers with his session plans, but includes information on his successful blue print on how to coach players on a 1-to-1 basis. He has also included a section on his renowned 'Player Development Plan'

It is vital importance that young players develop good 1 v 1 skills, this will make for a more dynamic player in the future. TheTWSports.Org Group continue to strive forward with a new excellence coaching structure headed by Tim Wareing. This offers young elite players additional opportunities to hone their skills in conjunction with their club activities. As the great Pele said, "When you control the ball you control the game".
Paul Kirk, UEFA Pro Licence Coach
Former manager of Premier League Side, Distillery

My son has been attending 1-on-1 coaching with Tim Wareing for over 18 months. We have seen a huge improvement, not only in his footballing skills, but also, in his overall concentration and confidence. Tim is an excellent coach.
Gareth Campbell, Parent


Luke has been receiving 1-on-1 coaching from Tim for over two years. He has been part of Tim's community programme from the age of six. After six months of Tim working with Luke he was invited into the Liverpool Academy based in Belfast. He has also been invited to the IFA County Down and Excellence Programme. A number of clubs are monitoring Luke's development after a successful performance in Holland on Tim's Academy tour as well as a great season with his club. I can't speak highly enough of the importance of 1-on-1 coaching and how it has developed my son's talent and ability..
Martin Kenny, parent of Luke Current Liverpool Belfast Academy Student

It is vitally important that children are fully developed as individual players as well as team players. On a recent visit to Northern Ireland I observed the excellent work carried out by the TWSports.Org Group in relation to not only team development but also the individual development coaching given.
Martien Pennings, Coach PSV Eindhoven (Holland)

Parents have to understand the need that if they want their child to become a football player it is essential they receive 1-on-1 coaching. Approximately 80% of clubs focus on the team and not the individual development. The TWSports.Org Group offer this essential 1-on-1 development.
Hugo Vicente, Coach Braga (Portugal)

What the TWSports.Org Group is doing is exceptional, it is different from what anyone else in Northern Ireland is doing, you try to bring the kids together at similar levels and start to work on that. At TWAcademy.Org it is all football related and child centred unlike other coaching which focuses on the physical aspect and not the talent.
Bert-Jan (BJ) Heijmans, Director Dutch UK Football School

Reviews 3
RATE THIS ITEM
Rating:
87% of 100
(3)
Write a review
Write Your Own Review
Only registered users can write reviews. Please Sign in or create an account